Tip #6 is all about overcoming rejection.  Before I took my first NLP Practitioner Certification Course, I learned about NLP from Tony Robbins’ live courses.  There was one particular one, Date With Destiny, that changed my life in more ways than one. 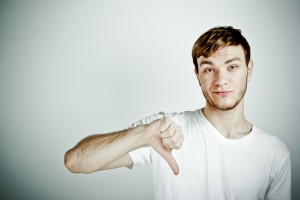 If you’ve ever been to a Tony Robbins’ course, you know that one of his favorite expressions is, “Just one more thing.”  That “one more thing” and the dozen other “one more things” which follow keep you up until 1-2AM in the morning, riveted to your seat, soaking up every last word.  And you will return eagerly at 7AM with little sleep, ready to jump up and down, giving every last bit of your energy to match Tony’s.  That is Date With Destiny for 5-days.  He does it on purpose.  During the first day he explains to you, “The reason you are here isn’t the reason you think you are here.”  I knew exactly why I was there.  My business was failing, I separated from my husband and I didn’t have any friends.  I needed to change.  That was why I was there.  Or was it?

On day 4, the reason I was there came crashing down on me like a ton of lead bricks.  And it wasn’t the reason I thought – just as Tony had predicted.  It was all about rejection.  I didn’t think I had a problem with rejection.  In fact, it was the furthest thing from my mind.  And yet, when we started the “big challenge” on day four, I soon realized it was a big problem and probably the one I needed to fix the most.

We were doing a simple exercise.  We had all chosen one word that would describe us the most and then convince our group of 4 (3 other people besides yourself) that you were that word.  My chosen word was PASSION.  All I had to do was say, “I am passion” with as much passion and conviction that I could so the other 3 people in my group would wildly cheer, “Yes! Yes!  You are passion!”  I thought my first attempt was really great and so did 2 out of 3 of the people in my group.  Ironically, it was my partner who said, “No, I just don’t feel your passion.”  No worries, I’ll just do it again.  On the second attempt, 2 out of 3 agreed, the same 2.  My partner explained to me that he was getting excitement and strength but not what he would call “passion.”  I was getting a little frustrated with my partner.  So, I tried again.  My frustration came through.  No one said “Yes!”

“Shake it off.  Shake it off.  You got this!” most of my team chanted.   I tried again.  And again.  And again.  Frustration turned to confusion.  Confusion turned to anger.  And then it hit me.  I couldn’t breathe.  I was so upset about my teammates rejecting my attempts, I was hyper-ventilating.  The leader of our section rushed over and whisked me out of the room.  He was a doctor and insisted that I get outside and start breathing into a bag.  I tried to explain what was happening but he couldn’t understand me through my gasping breath.  He sat with me for about 15 minutes until I regained control.

“What happened?” he asked.

“What makes you say that?” he asked.

“They wouldn’t believe me.  They wouldn’t agree that I was passion.  They told me I was wrong.”  I stammered between choppy breaths.

“So because they don’t agree with you means they don’t like you.  Is that correct?”

Flash forward to my NLP Certification Course.  I was learning about the Milton Model and something called a complex equivalent.  Basically it’s when you say one thing is another unrelated thing.

And it hit me.  When people disagree with me, I think they don’t like me.

I was behaving as if I was being completely rejected every time someone had an opinion that wasn’t the same as mine.  How ridiculous was that?

I started using some NLP tools which stopped me using this complex equivalent (and many more).  Now, instead of taking disagreement as rejection, I just put a curiosity frame around it.  It is a wonderful feeling to stop the rejection, even if it was happening only in my mind!

The next tip is more about confidence and my horrible, “We don’t have your size!” story.